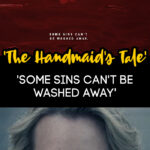 This is NOT a drill!! The Handmaid’s Tale is making its comeback, and I have two words: Praise Be!!

To say I am obsessed with this show is an understatement. I, legit, went to DC just to see the Lincoln Memorial because of this show! IYKYK

So much has changed since the very first season, and I’ve sat on the edge of my seat for every damn minute of it!

In case you don’t remember the Season 4 finale, holy crap!!

In the final scene, June managed to lure Commander Waterford into the demilitarized zone between Gilead and Canada.

What does that mean? Martial law, my friends. Bye-Bye Waterford. In the most spectacular, revenge-induced way.

All those handmaids. All that blood. Complete satisfaction.

I’ve never been so ecstatic to see a violent, bloody ending to a television show in my life!

BUT, now we are headed into season 5, and there are always consequences for all of June’s actions.

After that season 4 ending, we finally get to see why the heck June was saying goodbye to baby Nichole Holly in the most “I’m never going to see you again” way.

That’s only the tip of the iceberg, however.

You know there’s going to be hell to pay from Serena.

What about Nick? There HAS to be more Nick, or I’m rioting.

What’s going on with Commander Lawrence? Is he evil or good? Or maybe a little of both?

We know that Emily isn’t coming back, so how is that going to resolve?

Now, Hulu has already released some images of season 5, and I can’t freaking wait!

Get yourselves ready, because The Handmaid’s Tale is going to drop in less than a month.

Hulu will drop a 2-episode premiere on September 14 — which you know we will blow through in 1 sitting.

Then, like in previous seasons, they will release 1 episode per week.

That waiting game, tho!

We will get a total of 10 new episodes in season 5 — not nearly enough in my book.

BUT, at least The Handmaid’s Tale is back!!!