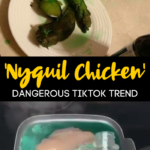 Where do people come up with some of the weird and dangerous things they decide to try and put out there on the internet?

Have we completely lost all common sense as a society?

I’m leaning towards the answer being a yes for a good chunk of the human species and that’s freaking concerning.

There have been so many concerning and dangerous trends on TikTok, from licking public toilets, the skull breaker, a Benadryl challenge, and even a fire challenge.

Don’t get me wrong, there are also a lot of great things on TikTok, but these dangerous ones are the concern.

What Is ‘NyQuil Chicken’?

Some people are calling it ‘NyQuil Chicken’ and others have labeled it as the ‘Sleepytime Chicken’, either way, it’s dangerous and dumb.

People are literally cooking chicken that has been coated in nighttime cold medicines like Nyquil.

In one of the videos that went viral they placed the chicken in a pot and then pour an entire bottle of Nyquil over the chicken and then cooked it, TikTok has since deleted the post.

I was able to see the process on YouTube and all I can say is EW!

‘NyQuil Chicken’ Is Not A Cold Remedy!

Even if you don’t eat it, just cooking it is dangerous!

You are literally aerosolizing the drugs in the medication and breathing in that aerosol!

By cooking a medicine with multiple drugs in it on a stovetop, you’ve aerosolized it and are most likely inhaling it. Inhaled, these medicines also enter your bloodstream really quickly and are not going past your liver for detoxification. The effects can be quite bad depending on how much you inhale.

People have even taken to creating other recipes like Nyquil pasta, again most of these have been removed from the app.

When you cook cough medicine like NyQuil, you boil off the water and alcohol in it, leaving the chicken saturated with a super concentrated amount of drugs in the meat. If you ate one of those cutlets completely cooked, it’d be as if you’re actually consuming a quarter to half a bottle of NyQuil.

Now I’m just now learning about this, but apparently ‘Nyquil Chicken’ first made its internet appearance back in 2017 on Twitter…

Inhaled, these medicines also enter your bloodstream really quickly and are not going past your liver for detoxification. The effects can be quite bad depending on how much you inhale.