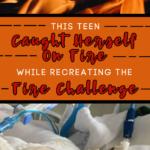 A teen is in the hospital, fighting for her life, because she set herself on fire after trying to recreate the Fire Challenge, which she saw on TikTok.

Say it with me, “We Don’t Have To Try Everything We See On TikTok!”

Some of these challenges aren’t fun and games y’all — they are REALLY messing people up!

Between the Licking Public Toilet Seats, the Dry Scooping Challenge, the Blackout Challenge, and the Benadryl Challenge — y’all, I’m seriously worried about this TikTok generation.

Just because someone was STUPID enough to try something dangerous and post it on TikTok, does NOT mean it needs to be recreated by every wanna-be social media influencer.

So this TikTok Fire Challenge may sound cool, but it is SUPER dangerous!!

13-year-old Destini Crane was apparently trying to recreate this Fire Challenge that she saw on TikTok.

In this Fire Challenge, users create designs on a mirror using a flammable substance that they then catch on fire — sounds pretty, huh?

But, this is just a horrible recipe for disaster!

If any of that flammable substance drops on anything flammable — like clothing or skin — it can catch on fire as well — OR, like in Destini’s case — the flammable container may explode!

Unfortunately, what happened to Destini’s is a PRIME example of this Fire Challenge gone wrong.

Destini was using a bottle of alcohol to create the fire pictures, but the bottle exploded, catching her face and body on fire.

Destini ended up catching herself on fire, and she had to be rushed to the hospital, where she was put into the intensive care unit.

It was unreal, heartbreaking, like I don’t think anyone wants to see their daughter on fire. It was horrible.

Y’all. I am a nurse. I have done rotations in the intensive burn unit of the hospital, and it is NOT a pretty place.

On a burn unit, there is so much pain, so many tears, so much depression, so many lives that are forever changed because of the devastation that is fire.

This is maybe one of the most dangerous things I’ve ever seen anybody do in my life.

When someone’s skin catches on fire, it literally melts, and it just takes SECONDS.

Destini has been in the intensive care unit since the middle of May, and her family says she will have to remain there for a couple more months.

The doctors had to perform a tracheotomy so 13-year-old Destini could breathe.

If you don’t know what a tracheotomy is, it’s where doctors have to make an incision in the throat and stick a tube in the windpipe to open a direct airway.

Destini is also in the process of going through skin grafts on her neck and arms.

Her family is sending out a warning to other parents of kids who might be watching these TikTok videos, and they say they hope to prevent this from happening to anyone else.

Monitor what kids are looking at, because they can put themselves in dangerous situations without even realizing it.

It’s about taking the time to have a conversation with your kids — even if you think they aren’t listening.

These TikTok challenges can not only hurt them, but they can hurt anyone who might be with them.