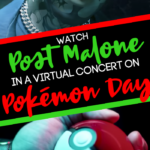 Post Malone is teaming up with Pokémon for a virtual concert, and the teaser looks hella fun!

National Pokémon Day is February 27th — yeah, it’s a thing — and this year, Posty is doing a virtual concert to celebrate.

Pokémon Day, a celebration of the day that Pokémon was introduced to the world — WAY back in 1996 — is a day when it’s ALL about the more than 800 species of little Pokémon monsters.

The best way to celebrate National Pokemon Day is to play! There’s tons of ways to engage, too; trading cards, video games, a TV and film series, books, manga, comics and more!

I can’t believe Pokémon has been around for 25 years. It kinda seems like it has just always been part of culture, right??

THIS year, Post Malone is getting involved in the celebration by hosting a virtual Pokémon concert.

I’m thinking that it’s going to be sort of like when Travis Scott showed up in the middle of Fortnite for a larger than life concert experience, and I can’t wait to see how it plays out!!

In the virtual concert teaser trailer, Post Malone is seen walking past paparazzi, and into, what looks like, a concert venue.

He grabs a mic, and the doors open for him to go onstage.

BUT, just before he steps out in front of the throngs of chanting fans, you see the Pokémon Ball in his hand.

Then, BOOM!! Post transforms into a CG character that looks just like the style of recent Pokemon games.

The concert will take place at 7 PM ET on February 27th and will stream on the official Pokemon website.

And, you best believe that I’m going to be sitting my butt in front of the computer, tuned into Pokémon.com at 7pm (4pm PST) on February 27th!!

I’m betting this is one virtual concert that you are NOT going to want to miss!!

The P25 Music program, which celebrates Pokémon’s landmark 25th anniversary with some of the biggest names in music, kicks off on Pokémon Day, February 27, 2021, with Post Malone’s virtual concert.

The P25 Music program is going to be an entire event, and more details about this program will be released after Post’s concert on the 27th.

Here is a spoiler that we already know: “Katy Perry is — set to release a new song titled “Electric” as part of P25 Music.”

There’s going to be even MORE collaborations with special artists that will be announced soon, so stay tuned!!

AND, see the Post Malone concert teaser trailer below.