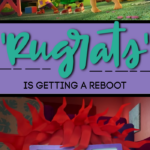 Ever since this news was announced, I can’t get the iconic theme song out of my head, and I’m not even mad!!

The Rugrats — easily my FAVORITE cartoon from the 1990s — is getting a reboot, and this time around they are going to be in full CG-animated glory!

This genius animated series, which showed everything from a baby’s point of view, will drop on the new streaming network, Paramount Plus, and I can’t wait!

Don’t worry, it’s not going to be some cheesy knock-off version of the original. The ENTIRE cast is set to reprise their respective roles!!

That means that Tommy, Chuckie, Phil and Lil, Susie, and Angelica will all be coming back for the Rugrats party! *SQUEE*

We are even going to see a return of Reptar!!

Now, you might notice there is one little baby missing, and that would be Dil Pickles.

According to Tara Strong (the voice of Dil), the producers informed (her) that Dil will not appear during the first season of the revival

Boo!! That is a bit disappointing, but maybe he will show up in later seasons.

Hey, at least we are getting MOST of the ORIGINAL cast in their ORIGINAL roles!!

According to Rugrats Fandom, this epic reboot will happen sometime in 2021, but we aren’t quite sure when just yet.

Now, the OG Rugrats aired from 1991-2004. (I know, I know, the babies should have been on their way to high school, but we are ignoring that part.)

There was a spinoff, All Grown Up!, which aired for 5 seasons in the 2000s, but we are taking it WAY back to the beginning with this reboot.

Thank goodness! The OG was WAY better than the spinoff, IMHO.

Be looking for more news to come soon on the Rugrats reboot! You know we will let you know just as soon as anymore news drops!

For now, you can see a trailer for the new Rugrats reboot HERE.

5.6K shares
This Starbucks Raya And The Last Dragon Frappuccino Will Give You All The Disney Vibes
← Previous
It's Official! A New Beavis And Butthead Movie Is On The Way
Next →
Click here to cancel reply.