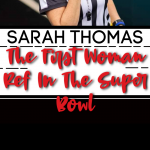 History has been made for women in last night’s Super Bowl game!

The Tampa Bay Buccaneers aren’t the only individuals who deserve a round of applause in last night’s game.

It took 55 Super Bowls for the first woman to officiate and work in a Super Bowl game and at the age of 47, Sarah Thomas has accomplished just that.

Before her biggest achievement in last night’s game, this isn’t the first time Sarah Thomas has gone down in history books.

She was also the first woman to officiate in a major college football game, to be hired as a full time NFL official and became the first female on-field official in NFL playoff history.

So you can say this is just one, of the many “firsts” in Sarah Thomas’s career.

“I’ve always said that if you do something because you love it and not try to prove somebody wrong or get recognition for it, the recognition probably just is going to happen,” Thomas told CBS News  in 2019.

Congratulations Sarah Thomas for paving the way for future women referees and crushing one of the many meanings of “girl power”!