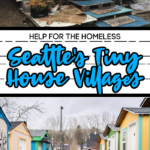 There are currently like 9 Tiny House Villages in Seattle, Washington. I think if done correctly, something like this could be the stepping stone that many people need to get back on track.

Homelessness is often looked at as a consequence of bad choices. Sometimes it is, but sometimes it isn’t at all. For instance, what we’ve all been dealing with for a year now.

Sometimes things just happen and people fall on very hard times. Once you’re down it’s really hard to climb back up.

Seattle’s Tiny House Villages have proven to be humane and successful for many people facing homelessness. They provide safety, privacy, laundry, showers, restrooms, community, and a place to store their belongings.

In January 2018, Mayor Jenny Durkan authorized the first Tiny House Village. It was exclusively for homeless women, and called the ‘Whittier Heights Village’.

In January of this year, Andrew Lewis, a Seattle City Council member, announced that he had secured $1 million in commitments from private companies.

The goal of the fundraiser is to secure enough money to double the number of tiny houses.

I really do think these villages could be a huge game-changer! But I would like to see them include some sort of community guidance professionals. Like they should have mandatory drug testing to live there.

It would also be cool if there were counselors. These counselors could help them take the steps to get back on their feet. We don’t want people to stop trying once they get shelter, does that make sense?

I would also love to see communities set up like this for our veterans. I see so many homeless vets and we should be treating them a whole lot better.

1shares
TikTok's Dangerous 'Blackout Challenge' Is Making Rounds Once Again
← Previous
'Harry Potter' Has Been Removed Off Of Every Single Streaming Service
Next →
Click here to cancel reply.