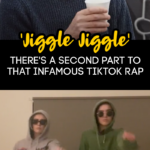 “My money don’t jiggle jiggle, It folds, I’d like to see you wiggle wiggle, For sure.”

We’ve all heard it. That rap performed by Louis Theroux, and made TikTok famous thanks to a dance routine by Jess Qualter and Brooke Blewitt.

Admit it — you’ve tried the dance — even if it was in front of your bedroom mirror all by yourself. LOL!

You may not know this, but the OG “Jiggle Jiggle” rap is actually 20 plus years old!

In 2000, Theroux was hosting a TV series for BBC Two called Louis Theroux’s Weird Weekends, in which he jokingly delved into various subcultures. During the third and final season, he visited New Orleans to confab with rappers like Master P in an attempt “to make it as the first white middle class gansta rapper.”

That adds a whole new dimension to the song, doesn’t it. Ha!

You also may not know this, but there was actually a SECOND verse to the “Jiggle Jiggle” rap.

There was a second verse to the rap. We didn’t use it. We didn’t need the rap to be that long. But, it exists. It’s not very good.

But, if it catches on like the first part of “Jiggle Jiggle,” we’ll all be dancing to it in no time.

You can watch the BBC video of Louis Theroux rapping the second part of “Jiggle Jiggle” HERE.