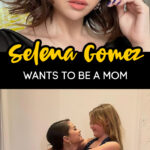 Selena Gomez is on fire right now when it comes to her gigs as an actress and singer.

She just finished Only Murders In The Building. Which, if you haven’t seen the show, it’s a MUST!

According to IMDB, Selena also has 3 projects in production, just completed voicing Mavis in Hotel Transylvania 4, and also finished up a whole slew of music videos.

It looks like there is just no end in sight to the projects and productions that Selena is fortunate enough to be a part of.

BUT, it’s all going to come to a halt at some point. Why?

I hope to be married and to be a mom.

Now, don’t worry. This isn’t going to happen tomorrow. Selena is talking about her future plans.

Eventually, I’m going to be tired of all of this, so I’m probably just going to devote most of my life to philanthropy before I peace out.

Selena gets a little taste of this “normal” life by spending time with her 8-year-old sister.

She puts things in perspective — I have to basically watch this little person grow into a human being. There’s no better feeling in the world. I kind of feel like a parent in a way, even though I’m not.

Turns out, Selena is great with younger kids, and gets plenty of practice for one day becoming a parent.

She has no problems hanging out with kids and taking on that role of caregiver and babysitter.

According to Yahoo, one of her younger sisters is friends with Jessica Simpson’s daughter, Maxwell. Selena took the young duo to their first concert — Olivia Rodrigo.

So thank you Olivia Rodrigo for that show. And thank you Selena for being a great babysitter.

So, it might not happen today, but SOMEDAY we are going to have to say adieu to Selena as she transitions into the role of wife and mother.

That makes us uber sad, but we are so happy that Selena has ambitions and goals outside of Hollywood. We wish her only the best.