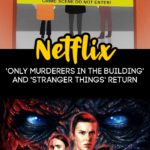 This is an exciting week to watch Netflix!

There are TWO shows coming back to the streaming giant this week, and I can’t freaking wait!

First of all, Only Murders in the Building is back for its second season.

If you missed season one, what the heck are you doing with your life? Go Watch It Now!

If that sounds weird, I thought so too. BUT, it totally works. Just trust me.

You will also recognize several people dropping cameos this season. Shirley MacLaine, Tina Fey, and Amy Schumer will join the party this season, and you will just have to watch to see if there is anyone else.

In this season, they are on the hunt for ANOTHER killer, and trying to clear their names in the process.

TWO episodes of Only Murders in the Building will drop on Tuesday, and then Netflix will give us one episode a week.

You can look forward to TEN episodes of Only Murders in the Building this season.

The second show that has new episodes dropping on Netflix this week is the one we have all been waiting for — Stranger Things, Season 4, Volume 2.

They left SO much hanging between worlds when Volume one ended.

I’m going to bet you’ve watched the first volume, but if you haven’t — SPOILER ALERT!!

What the heck is going on with Nancy? We left her in the grips of Vecna, and in a swimming pool that was quickly filling with blood.

We found out who Vecna is — but, What the heck?!? How are they going to defeat him?

I’m betting El is going to be involved somehow, don’t you?!?

AND, Joyce and Hopper are reunited — after a hella bloody situation went down at the Russian Prison. But, what now?!?