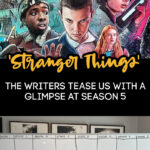 I can’t believe we are headed into the final season of Stranger Things.

It has been such a crazy fun ride, and I can’t wait to see where the finale takes us.

Of course, that’s still quite a ways away, but the writers of Stranger Things are already back at work.

Thanks to the powers of the Twitterverse, the Stranger Things writers just gave us the tiniest of clues about what season 5 has in store for us, and I can’t freaking wait!

In the picture posted to Twitter we see a grid on a dry erase board. You will immediately notice that there are 8 boxes going across, 1 for each episode.

This can lead us to believe that the final season of Stranger Things will consist of 8 episodes.

That’s about on par for what we have seen every season thus far.

So what about run times? Are we going to see a Season 5 full of movie-length episodes like Season 4?

I don’t think the run times will be as extreme in season five. We’re trying to return to the simplicity of the structure in season one, with bigger scale and scope. Except for the finale, which I’m expecting will be pretty massive.

Matt Duffer, via The Hollywood Reporter

One keen commenter on Twitter noted that, on the dry erase board grid, there is a DOUBLE LINE between episode 4 and episode 5. What does it mean?!?

We are just going to have to wait to find out!!

No release date has been announced for Season 5, but we will let you know as soon as word drops.