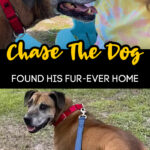 Chase is one happy dog! After spending all but 1 year of his life in a Florida shelter, he was finally adopted into his fur-ever home.

This pup arrived at Furry Friends Adoption, Clinic and Ranch way back in 2014, and he remained there until he was FINALLY adopted just last week.

Tracie Lundy, a former Furry Friends employee, fell in love with Chase back in 2019. She was a volunteer dog walker at Furry Friends, and slowly worked to gain Chase’s trust.

She said that it definitely wasn’t “Love At First Sight” between her and Chase.

He wasn’t particularly friendly and acted standoffish, so potential adopters overlooked him. I could see that he had ‘stranger danger.

But, she kept working with him. He undoubtedly had a tough exterior, but she could tell it was just an act. She knew that deep down, Chase was a “mellow and mushy” pup.

Chase wouldn’t even let Tracie walk him at first! She eventually gained his trust by letting him have his space and giving him treats.

She would patiently go out and accompany whoever was walking Chase around the Furry Friends property.

Eventually, all her patience and persistence paid off. Chase was FINALLY comfortable with letting Tracie walk him all by herself.

She wasn’t in a place to adopt him at the time, but knew that, one day, she would be back to get him.

That time finally came in July. Tracie lost one of her own dogs, so she had room in her home and heart for another dog.

She knew Chase would need space, so she put him in a fully furnished studio apartment that sits on her property. It’s separated from her house and her other dogs, so Chase gets that space he needs.

After so many years of living in a kennel, I thought the adoption would be a big adjustment, but he is doing fine and sleeps through the night. No howling. He is a couch potato!

Tracie is able to go visit him and take him on walks. It is here she is able to give him all the love, cuddles, and kisses that he needs.

Congratulations on your new home, Chase! We are absolutely thrilled — and a little bit in our feels — that you were able to find your fur-ever home.