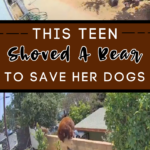 In the mountains of California lives Hailey, a 17 year old who got in a fight with a freaking bear, and lived to tell the story.

What’s even better, they got the whole thing on video, and Hailey just might be my new hero.

Hailey and her dogs were just minding their business on Memorial Day, enjoying their garden, when up over the wall came a giant brown bear.

The bear wasn’t by herself. She was a momma bear, and she had her two bear cubs in tow.

I’m not sure what the bear was thinking.

Maybe it was hungry, and it smelled the garden in the backyard.

Maybe it wanted to pick a fight with a couple cute little doggies — which it did, and lost.

So, the video, which was posted on TikTok by Hailey’s cousin, Brenda, shows the BIG ol’ bear climbing over the brick fence in, what Hailey says, is the garden.

As soon as the bear starts to come over the wall, you can see her bear cubs run off to the left of the screen.

Hailey’s dogs immediately spring into action, and go over to warn the bear to stay out of their yard.

The bear, not too happy with the doggos, takes a few swipes at Hailey’s furry friends.

It is then that you see Hailey run into the bottom right of the screen.

It’s as if she isn’t even thinking — she is just solely focused on saving her pups.

She runs over to the bear, who has now picked up one of the dogs, and gives it a big shove.

The bear falls over the back side of the brick fence, and Hailey is able to herd the dogs away in time to save them.

This is our garden area and the dogs start barking, and I just thought they were barking at dogs, because they always bark at dogs and squirrels or whatever. I go to tell them to stop and when I go over there to see what they’re barking at, I’m like ‘that’s a funny-looking dog.’ By the time I get there, the bear is literally picking up one of my dogs.

I go over to the bear, I look it in the eyes and the first thing I think to do is push it. Push a bear, push an apex predator. To be honest, I don’t think I pushed her that hard. I just pushed her enough to make her lose her balance, so she dropped my dog and I ran out of there. I grabbed my other dog, I sprained my finger and scraped my knee, but we’re all OK.

Quite honestly, I’m not sure I would be brave enough to shove a brown bear off a wall.

Hailey’s cousin, Brenda, posted the video on TikTok, with the perfect caption.

I don’t know about you, but next time someone threatens me, I’m calling in Hailey!!

You can watch the entire TikTok Bear Clip HERE.