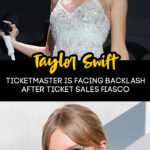 Were you one of the many who tried for Taylor Swift Eras Tour tickets when they went on sale?

It was pretty much a cluster — well — you know.

I had multiple friends who were “in line” for tickets, and then got knocked off the website. They ended up losing their place in line with no chance of getting those coveted tickets.

The poachers were sure able to get the tickets. Prices on StubHub for the sold out concerts are currently selling for upwards of $33,000.

Now, Ticketmaster is coming under fire for the disaster that was the Taylor Swift ticket chaos.

Some people are claiming that something is wrong with the ticket giant’s sale practices.

Things were so bad that lawmakers are commenting on the way things went down with Taylor Swift ticket sales.

Ticketmaster’s power in the primary ticket market insulates it from the competitive pressures that typically push companies to innovate and improve their services — That can result in the types of dramatic service failures we saw this week, where consumers are the ones that pay the price.

The Tennessee Attorney General is even launching an investigation into what happened with the ticket sales, after his office was inundated with complaints.

According to NBC, Attorney General Skrmetti did say that there were “no direct allegations of misconduct,” but that it was part of his job to investigate all the complaints.

Taylor Swift’s U.S. tour launches this March in Arizona — concluding in Los Angeles later in August. There are 52 total dates, and I’m totally jealous of anyone who gets to go.