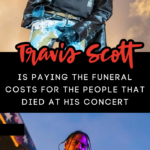 This entire situation was just a perfect storm of tragically bad choices, frenzied crowds that got out of control, and safety measures that obviously weren’t followed or put into place at all.

And now, Travis Scott is saying that he will pay the funeral costs for the 8 people that suffered a tragic death at his concert in Houston on Friday.

I’m just so sad for the families of the 8 people that tragically died while there to enjoy a music festival. They were definitely in the wrong place at the wrong time, and my heart breaks for them.

So, if you haven’t heard what happened, 8 people were killed at the Astroworld Festival in Houston during Travis Scott’s set on Friday.

They were pushed, stomped on, and trampled to death while Travis Scott watched on and allegedly continued to rile up the crowd to be more rowdy.

Not only did 8 people lose their lives, hundreds of people were injured.

I even saw an article about a child — a nine year old — that fell off his father’s shoulders and into the craziness of the waiting frenzied crowd. He’s currently in a coma.

I can’t even imagine.

Now, Travis Scott is saying that he will cover the funeral costs for the 8 people that died, and he is partnering with a service that will offer free online counseling to those affected by the concert that got entirely too out of control.

But is it too little too late?

I mean, I’m glad he is stepping up and helping, but he is showing up a little too late. The tragedy has already happened, and according to some people, he was okay with it happening at the time.

It doesn’t help matters that he is KNOWN for inciting riotous behavior and encouraging concert goers to do the opposite of what security is trying to tell them to do. In fact, he has been arrested and faced criminal charges in the past for just about the very same thing.

So, it’s really hard for me to fully appreciate the fact that he’s going to fork out some money, because concert goers at his concert are no longer here with us.

That is not going to do anything to ease the pain that is going to forever affect 8 families and countless friends.