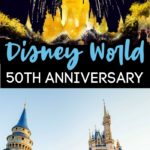 It’s been way too long since I was able to visit Disney, but the 50th anniversary is quickly approaching and they have a lot of special things planned!

In fact, Walt Disney World is planning an 18-month celebration in honor of the big 50th anniversary.

They are calling it “The World’s Most Magical Celebration” and all four parks at the Lake Buena Vista Resort in Florida will take part!

The resort opened to the public for the first time on October 1st, 1971, just a few years before I was born.

It has grown so much since then, and went from Magic Kingdom, to Hollywood Studios, Animal Kingdom, and EPCOT!

This celebration is going to be epic and will include a brand new nighttime show called ‘Disney Enchantment’ at the Magic Kingdom.

There will be fireworks, enhanced lighting, and it will start at the Cinderella Castle and continue down Main Stree, U.S.A.

At EPCOT they will have a show at the World Showcase Lagoon.

one of the largest nighttime spectaculars ever created for a Disney park.

Statement from Disney about the EPCOT show

This show will be performed by a diverse group of 240 artists from around the world!

Then, over at Animal Kingdom, the ‘Disney KiteTails’ will have performers flying wind catchers and kites all set to Disney songs!

There will also be a collection of golden sculptures of our favorite Disney characters that will be found at the 4 parks.

More exciting news is that Remy’s Ratatouille Adventure ride in EPCOT will open on October 1st!

All four parks will also feature “Beacons of Magic” every night! These are spectacular light displays!

So exciting, the characters will even have new costumes!