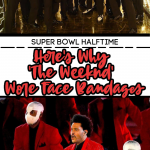 All over the internet, I am seeing mixed reviews about ‘The Weeknd’ half time show.

Some absolutely loved it and said it was the most family halftime show they’ve watched.

Other’s thought it was the worst halftime show they had ever watched. Others just want to know what’s up with the bandaged faces…

I was also curious as to why they had those on. At first I thought it was a creative yet weird type of mask, but there is actually a story behind it.

I’m going to be honest and say I knew nothing about ‘The Weeknd’ personally. I’m sure I’ve heard his music, but it just isn’t my thing.

But apparently if you have been following the ‘After Hours’ story, you probably already know that the bandages are not a new thing.

From what I am learning, ‘The Weeknd’ actually filmed a video for the song “Blinding Lights” with face injuries.

Then at the AMA there were face bandages as well.

At the AMA he removed the bandages and revealed a make-up job that gave the appearance of plastic surgery.

The significance of the entire head bandages is reflecting on the absurd culture of Hollywood celebrity and people manipulating themselves for superficial reasons to please and be validated.

I think that’s a pretty good message now that I understand!

You can watch ‘The Weeknd’ Super Bowl performance below!

I liked the show. He's a very talented guy!

I loved it, but I’m a huge fan of The Weekend ❤️