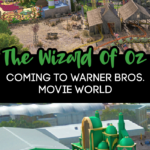 Move over giant spiders, weird flying foxes, bugs the size of my head, and kangaroos that are more buff than most guys at my gym.

There’s finally another reason to hit up Australia — and this time Chris Hemsworth isn’t involved.

According to Entertainment Weekly, Australia’s Warner Bros. Movie World just announced that they are going to open an entire “land” dedicated to The Wizard of Oz.

My bags are packed, and I’m on my way!

What is a Warner Bros. Movie World, you ask?

You also have to go to the Gold Coast of Queensland, Australia to visit. *BOO*

But, there’s never been a better time to book that trip, because Oz is coming to play.

Warner Bros. Movie Word is building an Oz-themed “land,” and it’s going to be an immersive experience with rides and attractions all set in the fantastical kingdom of Oz.

Oh my! Just announced! A world-first Wizard of Oz precinct is coming to Warner Bros. Movie World, featuring a suspended family coaster, a family boomerang racer, and immersive theming, set to provide a one-of-a-kind family experience for guests in 2024.

We don’t know a whole lot about this new section of Warner Bros. Movie World. But, really, do we need to? It’s Oz, man!

The concept art for this Oz land shows a suspended roller coaster that will be themed to the Wicked Witch’s castle.

There is also what appears to be a forward-and backward-traveling boomerang coasters traveling through Dorothy’s Kansas farm. Fun, right?!?

You can also see a recreation of the Emerald City itself, complete with yellow brick road, of course.

This section of Warner Bros. Movie World is set to open in 2024, and I want to be there!