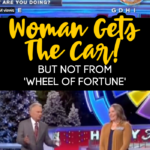 When I saw the woman on ‘Wheel of Fortune’ being told she wouldn’t get the car I was so sad for her!

I mean, she guessed it right and it was before the buzzer, so why the heck wouldn’t she get the car?

Apparently, I wasn’t the only one that was upset about it, just look on social media!

I thought if you guessed it before the time ran out that you win, the timer buzzed AFTER she said the correct phrase, but according to Pat Sajak, she paused too long.

Whatever Pat, we think you were wrong.

If you missed it, it was during the ‘bonus round’ and Charlene Rubush had no idea what prize she was playing for, imagine getting it right and being told no, and then it is revealed that the prize was a car.

Not just any car either, a brand new Audi Q3!

I guess that according to the rules that her pause was too long, even though she guessed it correctly in the allotted time.

You know, this one’s tough because you said all the right words, including the word ‘word’ but, as you know, it’s gotta be more or less continuous. We’ll allow for a little pause but not four or five seconds. I’m sorry. You did a good job in getting it, but we can’t give you the prize.

She said the first three words quickly, then paused before saying the fourth word.

Some people were so mad that they said they were going to boycott ‘Wheel of Fortune’!

Audi chose to step in!

The buzz on the internet was hot about what happened, which makes this a perfect opportunity for Audi to ride that wave in a good way!

Audi sent out a tweet that they would ‘#GiveHerTheQ3′, which is the hashtag that has been used by outraged fans of the show.

You’re a winner in our eyes, Charlene. Now, let’s get you a prize. Time to #GiveHerTheQ3.

You can watch the heartbreaking moment on Twitter here!

Bravo to Audi for making things right for Charlene!