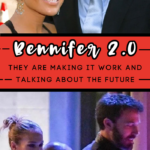 Ben Affleck and Jennifer Lopez — Bennifer 2.0 — are now openly talking about their relationship, as if we all didn’t know it was happening.

Sources even say that they are “both excited about their relationship,” and are starting to talk about their newly rekindled romance, thinking toward “the future” — you can speculate about what that means!

Right now, Jennifer lives full-time in Miami, Florida, and Ben lives all the way over in Los Angeles, California — so it might be just a little difficult to be together as much as they’d like.

But, they are determined to make it work this time!

They will travel back and forth as much as they can to make things work. They don’t want to hide anymore. They are both excited about their relationship.

We first brought you the news that Jenn and Ben had started seeing each other again, taking a quick getaway to Montana together.

And now, it looks like the relationship has hit full-steam-ahead!

They want to make sure they do everything they can to make this work. Jennifer is incredibly happy. She feels like she can just be herself around Ben.

If it seems like this rekindled romance is happening a bit fast, you aren’t the only one!

Jennifer was engaged to Alex Rodriguez for what seemed like FOREVER, but then they split in April.

BUT, sometimes, when it’s “right,” you just know it, and the stars align to make things happen QUICKLY.

Hey, I was in a relationship for 4 years. When it ended, I was engaged to my husband 6 weeks later — 20 years later we are still together!!

Maybe the same thing will happen for Ben and Jennifer!!

The couple previously dated for about 2 years back in 2002 — when they starred in Gigli together (I’ll save you the pain. Don’t watch it.).

They were even engaged, but broke off the relationship just days before the wedding.

Hey, maybe it just wasn’t the right time for the couple to be together!

I say, good for them!! I hope it works out, and they are insanely happy together!!