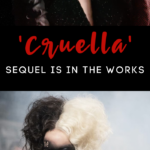 Disney is already in the process of developing a sequel to Cruella, and my little Disney-loving heart is jumping for joy!

By now, you know that the new Disney live-action Cruella movie — the prequel to the 101 Dalmatians classic — has hit theaters and Disney+ with Premier Access.

Raise your hand if you have seen it — if you loved it — and if you want to watch it again. *Raises Both Hands*

Now, it touches on some pretty dark issues, so if you haven’t seen it, you might want to tread lightly when it comes to gathering the family around to watch.

But, that being said, it was so excellent!!

Disney is really on a kick with their live-action versions of classic Disney stories, and I am loving it!!

It is especially excellent how we are getting the backstories on those villians that we love to hate — like Maleficent and Cruella!!

Now, Cruella is only in its infant stage at the theaters — it has a lot of life left to live — but Disney is already talking about, and in early development for its sequel, and I’m not mad.

We are very pleased with ‘Cruella’s’ box office success, in conjunction with its strong Disney Plus Premier Access performance to date.

The film has been incredibly well received by audiences around the world, with a 97% Audience Score on Rotten Tomatoes in addition to A’s in every demographic from CinemaScore on opening weekend, ranking it among the most popular of our live-action reimaginings. We look forward to a long run as audiences continue to enjoy this fantastic film.

Craig Gillespie, the director of Cruella, and screenwriter Tony McNamara are both expected to make return for the new flick, which is AMAZING — their work on the Cruella film was amazing!!

But, we have NO IDEA yet if Emma Stone will make her comeback in the second film — but really, how could she NOT?!?

Emma kind of MADE the movie, and I can’t imagine an outcome where she WOULDN’T hop on the sequel!

We will definitely bring you more news as it breaks about this second helping of Cruella.

And, as a side note, yes, Cruella is cool, but that doesn’t mean you should run out and get a dalmatian puppy.

Please, do lots and lots of research on those precious pups before you decide to jump at the chance to get one.