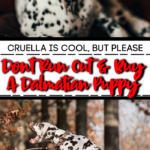 This has happened soooo many times and it drives me crazy!

It’s crazy to me that movies and cartoons make people decide to run out and get a certain breed of dog without doing any research whatsoever about the breed.

You may think I sound a bit harsh, but have you ever worked in rescue?

Not only is it irresponsible, but it also leads to the overbreeding of dogs being bred by backyard breeders and that is a very bad thing.

Backyard breeders do not do any genetic or health testing and will just breed and breed a dog.

They also don’t have return contracts on those dogs because they are not reputable breeders.

Basically, they don’t give a crap about how the dog turns out or what happens to it.

A lot of those genetic disasters end up in shelters and many of those dogs ultimately end up dying.

See, the Dalmatian is prone to some health issues and most are not even cut out to be the lazy lay around family dog people are hoping for.

Well bred Dalmatians are bred for energy and endurance, most people are not prepared to meet their needs.

A lot of them that are not having their physical needs and training needs met can even be dangerous to have as a family pet.

Sure, some of you will say… “Well, I had a Dalmatian and it wasn’t like that…” ok, but the statistics show that what I am writing here is more common than your experience.

If you don’t have the drive to do the exercising and training that the dog needs, it’s a disaster waiting to happen.

When ‘Disney’s 101 Dalmatians’ came out, everyone wanted a Dalmatian.

Many people ran out and got one and didn’t do a lick of research on the breed.

It was such a disaster that when Disney released their ‘102 Dalmatians’ sequel they added a statement that recommended researching a breed before getting one as a pet.

They even partnered with the Dalmatian Club of America to help educate people.

You don’t pick out a dog breed for a pet just because it is trendy, it’s irresponsible.

Just like all of the people that wanted a “wolf-ish” looking dog because they liked ‘Game of Thrones’, so everyone ran out and bought a Husky…

I’m a dog lover and do very well at training dogs, but even I wouldn’t be able to handle a Husky.

Even though I think they are beautiful, I wouldn’t be able to fulfill their needs.

People were rushing out and getting these trendy breeds of dogs without a second thought.

Then once the cute puppy phase was over, they dumped them as if it was nothing.

Breeds have traits and needs that need to be fulfilled, genetics are important.

If the animal isn’t fulfilled and trained and ends up in a shelter, they’re usually unadoptable.

Unadoptable dogs end up being euthanized.

There was another Dalmatian purchasing surge when the live-action film was released, with the same horrible outcome.

Do you realize that it’s estimated that 8% of the Dalmatians in the US are deaf in one year?

This is due to the demand and the backyard breeding puppy mills pumping out litter after litter.

People that have absolutely NO CARE about how the dogs will turn out.

So please enjoy the movie, but don’t run out and buy a Dalmatian puppy.

Unless you do the research and can meet the needs of the dog, just admire and don’t buy.