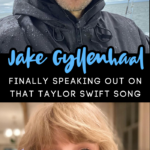 With the release of Taylor Swift’s new album, an updated version of her Red album, Jake Gyllenhaal has been thrown into the fire by all the Swifties yet again.

Jake is finally speaking up, and addressing the song “All Too Well,” which is supposedly about Mr. Gyllenhaal — although he’s never mentioned by name.

If there is one thing we can say about Taylor Swift, her songs are an honest reflection of her life.

Sometimes it happens to be at the detriment of former boyfriends. Poor guys never see it coming. Then — WHAM!! — they are slammed with Taylor’s lyrics, calling them out for the world to see.

Jake has kept quiet since his little fling with Taylor way back in 2010. But, now he is finally clearing the air and speaking out about the weird obsession that the internet has with this song.

Is “All Too Well” About Jake Gyllenhaal?

It has nothing to do with me. It’s about her relationship with her fans — It is her expression. Artists tap into personal experiences for inspiration, and I don’t begrudge anyone that.

Whether it was about him or the fans — it doesn’t matter. Those Swifties — the loyal fans of Taylor Swift — tore him up one side and down the other.

Jake even had to turn off his Instagram comments after the updated version of Red came out. He was being inundated with comments — the victim of cyberbullying, plain and simple — and he had to just distance himself from the situation.

At some point, I think it’s important when supporters get unruly that we feel a responsibility to have them be civil and not allow for cyberbullying in one’s name.

Now, Jake totally understands the fascination that people have with his personal life. It kinda goes along with his job, and he has certainly been blessed in the job department.

My life is wonderful. I have a relationship that is truly wonderful, and I have a family I love so much. And this whole period of time has made me realize that.

So, go ahead and take a listen to the song. Do you think Taylor was taking creative liberty talking about her fans — or does it point the finger at Mr. Jake Gyllenhaal?