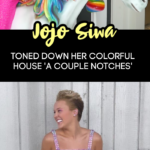 Jojo Siwa is known for her hella colorful life. It’s a bit like Lisa Frank threw up color all over her house, her car, her clothes, and her stage makeup.

I mean, when you think “Jojo Siwa,” you immediately envision wild colors and over-the-top style.

And talking. So So So noise. Just loud talking 100% of the time.

Back in 2020, she took to YouTube to give us a tour of her house, and it was almost too much for me to watch.

There were candy machines, ice cream rooms, unicorn statues, mannequins sporting her famous outfits, and so so much more.

And all of it was LOUD and super colorful.

But, not so much anymore.

She is growing up, and dancing her way into a whole different, calm level of her life.

Jojo recently had a sit down with People, where she talked about this jump into adulthood.

We did take it down a couple notches, and that’s because I used to be a very, very dedicated and committed YouTuber. I would always film in the house, and I wanted to be Jake Paul back in the day.

Her life then began to shift into a different phase — as happens when we become adults. She wanted to focus more on her music, TV appearances, movies, and other aesthetics — like maybe her stint on Dancing With The Stars.

When I stopped filming in the house every day, it was really weird for me to come into the house, and it felt like work. So I told my family, “Let’s change the house to a nice, pretty, calm, serene house.”

The world went into a frenzy when Jojo started her transformation.

She kind of eased us into it — by posting a TikTok video with her *gasp* hair down.

But, that was only the start of it.

In about two year’s time, she got a girlfriend, broke up with that girlfriend, got back together with the girlfriend, chopped off her hair, bought an adult luxury car, was seen taking “normal” trips to Disneyland, and just became more of an adult.

Good for you Jojo! Becoming an adult is a big thing, and I can’t imagine having to make the transition in front of the world.

You can now catch Jojo in her new Facebook Watch series JoJo Goes.

JoJo Goes is a brand new series on Facebook Watch giving the world a glimpse behind the glitter into JoJo’s evolving adult life.