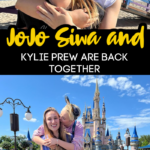 JoJo Siwa recently opened up about her love life and it looks like her fairy tale ending seems to be with Kylie Prew!

In an interview with Entertainment Tonight, Ms. JoJo Siwa shared her rekindled relationship with her current girlfriend Kylie Prew.

JoJo and Kylie who broke up in October of last year after nine months of dating sparked recent reconciliation rumors which happen to be true!

“I am in a relationship and I’m very happy and very lucky to be loved. It’s been very nice,” JoJo Siwa said to Entertainment Tonight.

“I think something that’s been great, is it’s been so honest, and I think that’s a mistake that I’ve made in the past, is maybe trying to be something that I maybe wasn’t. But this is just so pure and so honest, and it’s so real and it just feels like I/we got it right.”

JoJo who confirmed the speculation revolving around her and Kylie reuniting on Instagram, posted a photo of the two of them at Walt Disney World together with a caption that read,

Congratulations to the happy couple reunited!