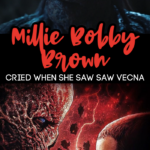 ‘Stranger Things’ is one of the coolest things to happen to television in ages!

Maybe it’s because I was an 80s kid, all of the nostalgia kind of thing… I dunno, but I love it.

If you have not watched Season 4 part one through episodes 8 and 9… then you may want to skip this post for now and come back later after you have.

Vecna is the scary character rampaging Hawkins in season 4 and he’s scarier than the Demogorgon and the Mind Flayer in my opinion.

Vecna is played by Jamie Campbell Bower and he looked so terrifying in his Vecna costume that Millie Bobby Brown started crying when she saw him on set.

They brought her up into a position where she’s bound. I walked up to her [as Vecna] and she burst into tears. She wouldn’t look at me and she was visibly just disgusted by the whole thing.

Once Millie Bobby Brown realized it was Jamie Bower, she calmed down and was fine.

After she cried and I made it obvious that she knew it was me, one of the things she said was that, ‘I knew it was you when I could smell cigarettes,’ because I’m a smoker.

Jamie had to have 25 pieces of latex and silicone rubber material actually glued to his body with medical-grade adhesive!

Could you imagine sitting through that multiple times?