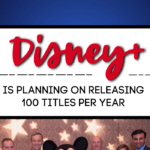 He also dropped the bomb that Disney+ is planning on coming out with 100 new titles per year!!

Disney+ is already constantly updating their streaming platform with new programming, classic programming, and shows that everyone loves.

Well, hold on to your Mickey ears, because their online catalog is about to get a whole lot bigger.

Now, this really should be NO shock to anyone, but I LOVE me some Disney!

Movies? We pretty much turned Disney+ on when it started, and haven’t changed channels much since.

I mean, did you WATCH WandaVision? Excellence!!

So, when they made the announcement that Disney+ was going to come out with 100 new titles per year over all their brands (Marvel, Disney Animation, etc), I had a little solo dance party in my front room.

We set a target of 100+ new titles per year, and this includes Disney Animation, Disney Live Action, Marvel, Star Wars, and National Geographic. Our direct-to-consumer business is the company’s top priority, and our robust pipeline of content will continue to fuel its growth.

Chapek went on to say that the success that Disney+ has seen over the last 16 months is the reason why they want to be even more ambitious with their numbers than previously planned.

All I have to say is, if they keep bringing us stellar programming like The Mandalorian and WandaVision, I’m going to be a Disney+ customer for LIFE.

Who am I kidding. I’d be a Disney+ customer for life regardless. *Smile*