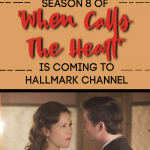 Do I have any When Calls The Heart fans out there?

If it seems like FOREVER since we have had a new episode of WCTH, that is because it HAS been awhile — over nine months, to be exact.

But, I finally have some GREAT news for all you Hearties out there! Season 8 of WCTH is right around the corner, and it’s time to get excited.

I can’t believe it has already been 8 seasons, can you??

And, y’all, there are wedding bells in the future for one lucky couple in the small town of Hope Valley. *Squee*

According to ET, “Hearties can look forward to yet another wedding occurring during the season,” but they’re not divulging who the lucky couple might be.

We may not yet know who the happy couple is, but we DO know a few things about the upcoming season.

First, and foremost, we know the season will premiere on Sunday, February 21st at 9pm ET, and of course, it will be on the Hallmark Channel.

We will get to meet and get acquainted with the new family moving to Hope Valley, the Canfields.

Joseph Canfield is the family patriarch — Joseph is married to his wife, Minnie — (who is the) very protective mother to their two children — Angela and Cooper.

There will be so much to learn about this new family!

Joseph will focus on trying to buy the gas station in town, which proves to be harder than you might think.

The Canfield daughter, Angela, who is visually impared, will try to fit in and get an education at the school where Elizabeth is a teacher. BUT, is Elizabeth the best choice to teach Angela?

Cooper, the son, will be an excellent addition to the school, and I can’t wait to get to know this kid!

Then there is mother, Minnie. We will learn that she is very protective of her family, and she is going to have trouble letting her daughter, who has been homeschooled thus far, attend a traditional classroom.

Besides the introduction of the Canfield’s, there will be so much more going on in the small town of Hope Valley.

We’ll watch as Elizabeth’s relationships with Nathan and Lucas continue to deepen, Faith and Carson will be forced to make choices about their future, and Rosemary and Lee are getting some unexpected news.

Y’all, will you be tuning your TVs to Hallmark Channel at 9pm ET on Sunday, February 21st to watch the When Calls The Heart premier?

I don’t want to miss a moment!