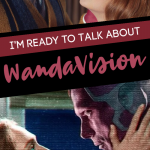 It took me about a day — and another playback of the show — to process what all happened in the finale of WandaVision.

This is one of the BEST endings to any Marvel show — nay, ANY show — that I have ever seen!

Oh, there WILL be spoilers, so turn back NOW if you haven’t seen the finale.

Okay, so the first thing I have to say, we were promised a cameo that rivaled Luke Skywalker at the end of The Force Awakens.

I mean, Paul Bettany, who plays Vision, even went as far as to say that he had always wanted to work with this actor.

At first, I was like, “Where the heck is the surprise cameo that we were promised?”

Then it hit me. The White Vision was the cameo.

Paul Bettany was saying that he was going to get to work with himself — an actor that he’s always wanted to work with.

Then, there were so many EPIC fight scenes!! Vision against the White Vision, Wanda (as the Scarlet Witch) against Agatha Harkness, Wanda and her family against them ALL!!!

Your power exceeds that of the Sorcerer Supreme.

Agatha Harkness to Wanda in the WandaVision finale

Then, the way that Wanda had to say goodbye to, first her kids, and then Vision.

Y’all, it was just the most perfect, sweetest goodbye EVER!!

You know, a family is forever. We could never truly leave each other, even if we tried. You know that, right?

Wanda to her boys in the WandaVision finale

Boys? Thanks for choosing me to be your mom.

Wanda to her boys in the WandaVision finale

OMG, y’all. Even my husband was crying — nay, bawling.

But, the feels didn’t stop there.

Wanda and Vision had to say goodbye to each other, and my heart was ripping out by this point.

The scene when they’re in the living room, and Vision asks Wanda what he is? GAH!!

The piece of the Mind Stone that lives in me, a body of wires and blood and bone that I created, my sadness and my hope. But mostly, you’re my love.

Wanda to Vision during the WandaVision finale

Oh. My. Gosh. I can’t even. I’m tearing up just thinking about it.

Who knows what I might be next? We’ve said good-bye before, so it stands to reason …”

Vision during the WandaVision finale

Wanda during the WandaVision finale

I mean, White Vision did take off after finding the memories, and we don’t know what happened to him.

You can’t tell me we aren’t going to see him again!

Okay, if you didn’t stay ’till the very end, you missed the two short scenes that totally set the movie up for what’s to happen next.

There was that whole scene with Monica and the Skrull. So, you know she is going to meet with Nick Fury (that’s what I’m thinking, anyway).

But, then the VERY LAST scene shows Wanda, by herself in a picturesque mountain woodsy area.

She is sitting on the porch of a little cottage, her tea whistle goes off, and she goes inside to get it.

BUT THEN, we cut to the bedroom of the cottage, where Wanda (The Scarlet Witch) — as an astral projection who is reading through the Darkhold (the book of the damned).

This is a direct reference to Dr. Strange — which this show is supposed to set up and bleed into.

Dr. Strange is the aforementioned Sorcerer Supreme, and Wanda is now able to perform this astral projection — which we already saw Dr. Strange using to complete multiple tasks at the same time.

Hmmmm. What’s going to happen next? I can HARDLY wait for Dr. Strange 2 to drop!!

It makes my heart happy that Wanda realized what she was doing to the town of Westview and everyone in it, and decided to do what was good and right.

She chose the good of humanity over making herself happy in the moment, and that’s hard for anyone to do.

That’s why she’s a superhero, and I love her!!