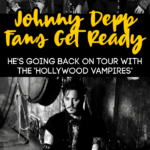 Johnny Depp is out of court and is living like the rock star that he is again!

I’m sure you are all up to date about the Johnny Depp and Amber Heard defamation trial and the outcome was in his favor.

Now it’s time to move on with life and what’s better than going on tour with some of your best pals in your band!??

The ‘Hollywood Vampires’ are hitting the road and going back on tour soon and now is your chance to plan your trip to see them live.

The band is made up of Alice Cooper, Joe Perry, Tommy Henriksen, and of course Johnny Depp and the tour will start in the summer of 2023.

Alice Cooper announced the exciting news on Instagram along with information stating that the tour will kick off in Germany and Luxembourg!

The Hollywood Vampires are BACK!! We’re coming to Germany & Luxembourg Summer 2023.

Here are just some of the dates for the upcoming tour and I am sure more will be added:

Tickets will be available starting on June 27th, 2022 at 11 a.m. Central European Time

You can purchase your tickets here once they go on sale!