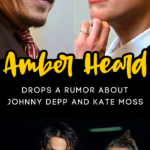 Before the Johnny Depp Versus Amber Heard Trial went on its weeklong hiatus, you may have caught Amber slip Johnny’s ex, Kate Moss, into the testimony.

Now, you might remember that Johnny and Kate dated at one time. But, this was WAY back between 1994 and 1997.

Hello! That was dang near 25 freaking years ago. Like, get over it, already.

Amber is accusing Johnny of being a jealous lover, but she is kind of backing herself into a corner with this one.

Before she stepped down from the witness stand, Amber referenced an explosive fight that she had with Johnny on a staircase.

She claims this fight came about after she found text messages that may have alluded to the fact that Johnny was cheating on her.

It was at this point in the trial that Amber brought up a rather unlikely name: Kate Moss.

According to Insider, Amber referenced a previous claim — made by her at the 2020 defamation trial with The Sun — that Johnny allegedly pushed Kate Moss down a staircase while they were dating.

Let’s again be clear. This was something that Amber claimed.

The Kate Moss incident isn’t something that has been substantiated.

So, Amber said that she found these alleged text messages on Johnny’s phone. Then, all of a sudden the pair were standing on a staircase.

For some reason, supposedly, Johnny started taking swings at Amber.

But wait, her sister, Whitney, was there and jumped between the two.

She threw herself like in the line of fire — All of a sudden she was there and she was trying to get Johnny to stop. Her back was to the staircase, and Johnny swings at her.

I don’t really know the relevance to this convoluted story, but whatever.

It’s at this point that Amber said she flashed back on the memory of Kate Moss and Johnny on the staircase all those years ago.

I don’t hesitate. I don’t wait. I instantly think of Kate Moss and the stairs and I swung at him.

Yep. She just admitted to taking a swing at Johnny.

It gets even better, she admits to hitting him “square in the face.”

In all of my relationship to date with Johnny I hadn’t landed a blow — And I, for the first time, I hit him, like actually hit him square in the face. He didn’t push my sister down the stairs.

So, about Kate Moss. She isn’t on the official list of witnesses that Johnny’s lawyers were planning to call to testify.

Turns out, we may be seeing Kate Moss during this trial before it’s all over.

Let me just grab my popcorn and get cozy. This is going to be interesting.