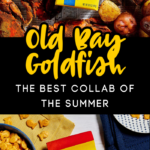 Oh, snap! This isn’t something I would have originally thought of, but now that I know they exist, I MUST have them.

Apparently people — people that are more ingenious than I — have been sprinkling Old Bay on their Goldfish for years. Pepperidge Farm is just making it official with their limited edition Old Bay Goldfish in a bag.

These Old Bay Goldfish might even be better than the collab between Goldfish and Frank’s Red Hot that we saw last summer.

Now, Goldfish are usually thought of as a snack for little kids. Their shape and size are perfect for itty bitty hands.

But, I’m not afraid to admit that I have been known to chow down on a bag by myself. You know, absentmindedly while at work. They get gone before I even realize what has happened.

Just imagine how fast these Old Bay seasoned Goldfish are going to disappear.

Wouldn’t they be just perfect alongside a Dirty Vodka Martini or a spicy Bloody Mary? Gah!!

This Old Bay Goldfish Cracker Collab Is Here Just For The Summer.

For a limited time only, the signature blend of 18 herbs and spices that’s great on seafood and great on everything else, is now on everyone’s favorite fish-shaped cracker. Our Original Goldfish are topped with OLD BAY for a perfect-for-summer snack that delivers big, bold flavor.

So, when you see them, you are going to want to stock up!

Make sure you watch that Best By date, though. Crackers are NOT known to fare well in the freezer.

This limited flavor is rolling out now to retailers nationwide where Goldfish are sold.

Now, these Old Bay Goldfish haven’t been spotted in stores yet. BUT, they are definitely on their way, so keep your eyes peeled!

If you don’t want to wait for them to drop into stores, you can pick up a bag of these Old Bay Goldfish Crackers on the Amazon website.