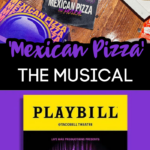 And to rejoice even louder, Taco Bell has deiced to make a musical about the beloved Mexican Pizza meal!

The musical, which is a story that follows the tale of those who fought to bing the Mexican Pizza back when it was once taken away, according to a press release from Taco Bell.

Featuring Dolly Parton, Dojo Cat, and TikTok star Victor Kunda who posted a video creating the imaginary tale who brought the “Mexican Pizza: The Musical” to life will all be performing on a virtual stage!

Written by Hannah Friedman, the musical will also include original music by Abigail Barlow and Emily Bear.

Just a few days after the Mexican Pizza returns for good, fans can watch the musical eating the very meal the musical is inspired from their living room couch or the bed.

Debuting on May 26, “Mexican Pizza: The Musical” will premiere exclusively on TikTok at 8 p.m. ET