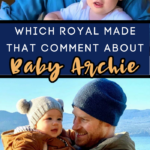 It was like the shot heard ’round the world.

We all froze in anger? disbelief? question? when we watched the Oprah interview with Prince Harry and Meghan Markle, and found out that SOMEONE in the Royal Family was concerned that Archie would come out too dark.

I mean — WHAT??? Is that actually something that someone would say?

One Royal said they were concerned about “what that would mean or look like” if Archie were to look too dark.

There are SO MANY THINGS that the couple dropped on the public during that interview, and we are still reeling a bit from all the bombshells.

BUT, the BIG question on everyone’s mind: Which Royal said THAT about sweet little Archie?

Oprah tried and tried — both onair and off — to find out who the ignorant culprit was, but Prince Harry and Meghan are keeping that bit of information to themselves.

All Prince Harry WOULD say is, “it was not his grandmother nor his grandfather that were a part of those conversations.”

So, that means the Queen and her husband, Prince Philip, are safe from scrutiny, here.

I’m never going to share (who said it), but at the time, it was awkward and I was a bit shocked. That was right at the beginning: ‘What will the kids look like?’

That leaves just a few more people, and we can use our best imaginations as to WHO might be the snobby racist.

I must say, kudos to the couple for keeping such volatile information under wraps.

They could totally RUIN whomever the culprit is, but they are choosing to take the high ground.

That makes them the TRUE Royals, in my book.