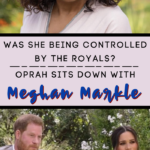 The Oprah interview with Prince Harry and Meghan is set to air Sunday, March 7 at 8:00 p.m. EST/PST, and let me tell you, I have my popcorn ready!!

This is going to be a gossip-fest, roller coaster ride, and I can’t wait!!

We already know that Oprah has promised that there is “no subject that’s off limits,” so a true tell all it’s going to be.

We have seen clips where Prince Harry seems to compare his and Meghan’s royal troubles — royal fiasco, if you will — to that of Lady Diana, Harry’s mum.

We watched the trailer when Oprah alludes to the fact that Meghan was silenced, and not making the choice to be silent.

Well, NOW we get a clip of the Oprah interview that makes it seem like Meghan was controlled in every way, unable to live her “independent life.”

Can I just butt in here and say, YOU WERE JOINING THE ROYAL FAMILY. What did you THINK was going to happen?

Not everyone gets to be a princess. You knew what you were getting into.

Oprah talks about a phone call she had with Meghan before the wedding, saying that Meghan wasn’t allowed to talk to her without “The Firm” being present.

Oprah was asking for an interview, and it’s the royals you are playing with here. They aren’t just going to give Oprah the scoop because she’s OPRAH.

I’m not saying it wasn’t tough. It would be slightly hellish to go from a carefree independent life to that of royal confines.

But again, you knew what you were getting into.

Y’all. This interview is going to be so juicy!!

Were Meghan and Harry being controlled by the Monarchy?

Is the Monarchy in the right, because there are royal protocols, and Meghan and Harry were breaking said protocols?

Probably yes, more than we know!

I’m sure there are arguments on both sides for what’s right and wrong — but it’s sure fun to watch it all play out!!

Be there for the Oprah interview with Prince Harry and Meghan on Sunday, March 7 at 8:00 p.m. EST/PST on CBS!

Let's be real here. She wanted to be a royal and found out it was to hard for her. You can't have it both ways. Now she isn't a royal so she is doing an interview because they are broke. Remember they gave up everything, titles and royalties. They are now common people just like his uncle who left the throne to marry a movie star did. They are getting no more money from Daddy or the Queen, or the British taxpayers.

@Donna Cooper, we sure aren't talking about Randy Andy, aka Prince Andrew, being a rapist anymore are we?

They still serve needs of the Firm

@Donna Cooper, actually his dad set them up nicely but I agree with what you are saying this just did this for the press