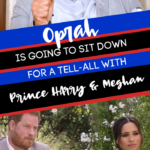 I love a bit of good juicy gossip, and Oprah is about to bring it first hand!!

There is about to be a sit-down interview between Oprah and Prince Harry and Meghan, and oh, it’s about to go down!!

Oprah has promised that there is “no subject that’s off limits,” so I bet we are about to get the sordid deets that went down between the couple in question and Buckingham Palace.

It doesn’t get much more juicy and behind the scenes than that!!

From the setup and sneak peeks, it looks like they are setting this up to be a scandal of Princess Diana proportions.

I’m just really relieved and happy to be sitting here talking to you with my wife by my side. Because, I can’t begin to imagine what it must have been like for “her,” going through this process by herself all those years ago.

Although they have obviously been through a lot, it is evident that they do not regret the decision they made to leave their positions as senior members of the Royal Family.

It has been unbelievably tough for the two of us, but at least we have each other

A source told E! News that, “They are going to touch on a lot of how mental health came into play and how it affected them.”

I can’t even imagine what they have had to endure during all this mess, and I’m so excited to learn the details “first hand!”

The Oprah interview with Prince Harry and Meghan, aptly named Oprah With Meghan and Harry: A CBS Primetime Special, is set to air Sunday, March 7 at 8:00 p.m. EST/PST.

You can see the teaser trailers HERE and HERE.

It was just last week, we found out that the couple are pregnant with their SECOND baby! Archie’s going to have a little sibling!!

I am so happy for them. They deserve all the good.