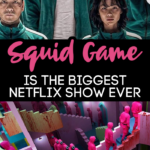 If you haven’t watched Squid Game yet, it’s at least safe to say that you’ve heard of it. It’s kind of hard to stay away from it at this point!

Nothing like watching a show where tons of people are getting slaughtered to take the cake. But to be fair, this show was done pristinely!

This fictional drama from South Korea is taking over TVs, stores, merchandise, Halloween costumes and TikTok. It debuted on September 17th and has been watched on 111 million accounts so far!

In comparison, Bridgerton, which was the biggest show, only hit 82 million accounts in the first month. So thats a HUGE difference!

This series is in the #1 spot in the Netflix Top Ten in 94 different countries and is the first time a Korean film has made the top rank in America!

The Rotten Tomatoes score sits pretty at 91% too, so we’re not all just crazy here, it’s really good! Now we just have to wait and see if and when a season two is coming around. But it’s probably safe to say, it will happen.