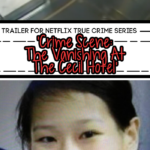 A little over a week ago I told you about the newest Netflix True Crime Documentary coming out. It’s called ‘Crime Scene: The Vanishing At The Cecil Hotel‘.

They just released the trailer and it has me even more excited than I already was. This is going to be GOOD.

It’s a 4 part series that explores the events leading up to the disappearance and death of Eliza Lam. She vanished from the Cecil Hotel in 2013 and was later found dead in a water tank on the hotel roof.

From director Joe Berlinger (Conversations With a Killer: The Ted Bundy Tapes, Paradise Lost), Crime Scene: The Vanishing at the Cecil Hotel is the first season in a new documentary series that deconstructs the mythology and mystery surrounding infamous locations in contemporary crime.

Eliza was a 21-year-old college student that was spotted on CCTV acting very strangely. Like super strange, it gives me the creeps every time I watch the footage.

The Cecil Hotel has some serious history when it comes to death and murder. In fact, even a certain serial killer liked to sleep there.

Lam’s disappearance, the latest chapter in the hotel’s complex history, offers a chilling and captivating lens into one of LA’s most nefarious settings.

The ‘Crime Scene: The Vanishing at the Cecil Hotel‘ documentary will premiere on Netflix on February 10th and I will be watching!

Watch the trailer below and let me know what you think!