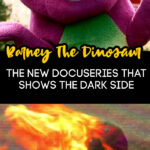 There is a new docuseries coming to the Peacock streaming network, and I totally feel it in my soul

I Love You, You Hate Me will follow “the rise and fall of Barney the Dinosaur’s furious backlash—and what it says about the human need to hate.”

And hated, he definitely was.

Barney — that damn purple dinosaur — was the 90s show that every single kid — aged 0 to about 7 — was OBSESSED with.

He was also the character that every single person over the age of 10 HATED.

I had the unfortunate pleasure of growing up in the Dallas / Ft Worth area in the 90s — a mere 30 minutes from where Barney was filmed.

One of the Barney kids lived on my street.

I couldn’t escape that purple monstrosity. He haunted my dreams and LIVED on the TVs of every kid that I babysat back in the day.

“I love you, you love me. We’re a happy family.” That kitschy theme song was EVERYWHERE.

Incidentally, Barney and Friends is the show that introduced Selena Gomez to the world.

But, the new Barney docuseries on Peacock, I Love You, You That Me, shows just how out of hand the Barney backlash became.

From Barney-bashing to frat parties to homicidal video games, something in American society broke into a million pieces, and it’s never been put together again — Or is this just who we were all along?

Peacock, I Love You, You Hate Me description

Barney was so hated by a sect of the population, people were violently destroying Barney merchandise.

I’m not proud, but I may have destroyed a video tape or two, and just might have beheaded a big purple stuffed dinosaur.

According to Entertainment Weekly, the show’s cast and crew became the center for death threats.

There were even rumors — that we all heard — like the one that said that Barney hid drugs in his tail.

I Love You, You Hate Me will give us the dark backstory to that beloved giant purple dinosaur.

You can see the trailer for I Love You, You Hate Me below.