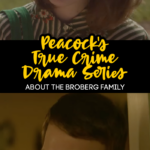 Real life truly is stranger than fiction, and this story just proves that.

Remember when the documentary ‘Abducted in Plain Sight‘ was released on Netflix?

I think every single one of us that watched it was completely speechless for a moment, and then were like… how could it get any worse… yet it did.

I know I couldn’t even process how such a thing was able to happen.

Well, Peacock has created a limited true crime drama series about the Broberg family and they just released the trailer.

While watching the trailer I was completely creeped out, I think they did a great job showing just how creepy the dude was.

What’s interesting about this series is that Jan and Mary Ann Broberg serve as producers on the series.

The limited series stars the following:

It’s easy to judge the Broberg family’s story from the outside. Sometimes when people first hear it, they get defensive: How could these parents have let this happen? I’m not like them. That’s understandable. It’s a surreal story. When I first heard it, I empathized with the family’s vulnerability, and I felt like I understood their story from the outside. But it stayed with me, and I wanted to understand from the inside — to know what their lives felt like, to live in each family member’s experience, to see how they were caught in such a bizarre web, and help audiences understand too.

This is inspired by the horrifying true story of the Broberg family.

If you don’t know the story, their daughter, Jan, was kidnapped more than once (yes… crazy, I know) by someone that was considered a friend of the family.

‘A Friend Of The Family’ premieres on Peacock on October 6th, 2022 starting with the first 3 episodes then there will be new episodes added weekly.