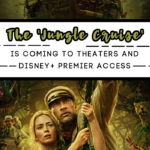 One of my FAVORITE rides at Disney World — and Disneyland, for that matter — The Jungle Cruise is getting a live-action movie, and I am betting it’s going to be FANTASTIC!!

Disney is all about making live-action versions of their old films — Beauty and the Beast, 101 Dalmatians, The Lion King, The Little Mermaid, Lady and the Tramp, and Hercules, just to name a few.

They have also been known to make live-action movies based on their rides — The Haunted Mansion and the Pirates of the Caribbean franchise.

Now, they are at it again, and will be tackling the world of the Jungle Cruise!

And, of course, they are sticking in A-list celebrities to entice us to watch — and to guarantee it will be an EPIC success!

Dwayne Johnson and Emily Blunt will play the main characters, and I’d watch just to see them in action.

Join fan favorites Dwayne Johnson and Emily Blunt for the adventure of a lifetime on Disney’s JUNGLE CRUISE, a rollicking thrill-ride down the Amazon with wisecracking skipper Frank Wolff and intrepid researcher Dr. Lily Houghton.

Now, if you have ridden The Jungle Cruise at any Disney theme park, you know it is a hilarious ride — with the boat captain cracking jokes the entire time.

I expect that this movie will have hilarity interwoven throughout the storyline.

Lily travels from London, England to the Amazon jungle and enlists Frank’s questionable services to guide her downriver on La Quila—his ramshackle-but-charming boat.

Just like Pirates of the Caribbean, you can expect this film to delve into the wonder and magic of the ride — and hit, not only on backstory, but on the quirks and mythology surrounding the ride.

Thrust on this epic quest together, the unlikely duo encounters innumerable dangers and supernatural forces, all lurking in the deceptive beauty of the lush rainforest.

Now, the world isn’t completely out of this whole worldwide pandemic thing, so you are going to have a couple options when watching this film.

Jungle Cruise will be available in theaters — man, I miss theaters! — July 24th, and that’s how I plan to watch it (thank you COVID vaccine).

It will also be available to stream on Disney+ Premier Access on July 30th.

So, grab your Jungle Cruise skipper hat, and get ready to join the fun in July!

As the secrets of the lost tree unfold, the stakes reach even higher for Lily and Frank and their fate—and mankind’s—hangs in the balance.