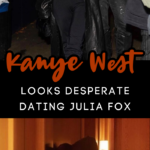 Kanye West is reportedly dating Julia Fox — the Italian-American actress you know from Uncut Gems — and Kim Kardashian is calling it a “desperate” move.

Now, we are referring to Julia Fox as Kanye’s girlfriend? Okay.

It is well documented that Kim Kardashian is now dating Pete Davidson. I mean, they have gone to Knott’s Berry Farm together, made their relationship Instagram official, and are now reportedly enjoying a carefree time in the Bahamas.

[Kim] doesn’t know where their relationship is headed, I’m not sure she views him as marriage material, but she really is so happy right now and needed that after everything she’s gone through.

Kanye West has gone on record saying that he’s going to get Kim back. He doesn’t approve of Kim’s new relationship, and she supposedly belongs with him.

Heck, even just last week, Kanye bought a house across the street from Kim K. It was supposedly to be closer to his kids, but I think we can sort of infer that it was part of his plan to keep an eye on Kim.

Well now, Kanye is romantically involved with Julia Fox. I mean, what?!?

News outlets are even referring to Julia as Kanye’s GIRLFRIEND!!

The two apparently met on New Year’s Eve in Miami, and the connection was instantaneous.

It must have been — because we aren’t a week past the New Year yet, and they are already “romantically dating.”

The two partied the New Year’s away, and then flew to New York to go see “Slave Play” on Broadway.

There’s even photographic evidence that the two were lip-locked during dinner at Carbone after the play.

I’ll say this. When Kanye becomes obsessed with someone, he goes all in — like, he jumps off the cliff with both feet and doesn’t look back.

After dinner, more surprises followed … Julia says Ye brought her to a hotel where he had an entire suite full of clothes … describing it as “every girl’s dream come true” and “a real Cinderella moment.”

Kim isn’t buying what Kanye West is throwing down with his well documented dating attempt.

I mean, he supposedly orchestrated an entire photoshoot while at dinner with Julia Fox after their New Year’s Eve shenanigans. He knew full well that these pictures would be leaked all over the tabloids.

Not to mention, for the last six-weeks-or-so Kanye has been basically saying that Kim needs to get it together and come back home to him.

I can hear Kim K’s eye roll from here.

She knows it’s not serious and is just typical hijinks from Kanye, — She honestly doesn’t care, she’s very over him at this point so his little game isn’t working.

Kim Kardashian is over it. She is enjoying her time with Pete Davidson, and could really care less what antics Kanye chooses to dish out.

Kim has already petitioned to be legally single. That spoke louder than any pathetically blatant photo shoot Kanye could orchestrate with Julia Fox.

I kind of feel bad for Julia Fox at this point. Maybe she is a collaborator in the public show by Kanye. But, on the other hand, she might actually buy all this — we’ll call it Kanyeism.

I sincerely hope she isn’t buying into this mess.

It would truly suck if Kanye were to lead Julia on, and then drop her like a hot pan if Kim showed any inkling that she might be jealous.

Stay tuned while the Kim / Kanye saga continues to unfold — because you KNOW it’s going to keep on with its weird twists and turns.