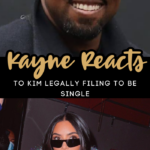 Kim Kardashian is moving on from her estranged husband and if you thought dating comedian Pete Davidson was the end of the saga, Kim has also decided to legally file to be single.

While Kanye West is currently singing to his estranged wife to come back to him, the reality star doesn’t want the same fate.

In fact, according to court documents obtained by PEOPLE, Kim insisted that her marriage to Kanye “has irremediably broken down,” and that “there is no possibility of saving the marriage through counseling or other means.”

The television star has also filed to restore her maiden name back to Kimberly Noel Kardashian, dropping Kanye’s last name.

Following her filing, Kanye still cares for her and his family,

An insider close to Kanye explained to PEOPLE that family and marriage are “important” to Kanye, and that he’s a “family man at heart [whose] love and commitment” to his ex-wife and four kids “will never change.”

“He’s not giving up without a fight. Kim is the mother of his children and he’s not going to just let that go,” an insider who told People. “No matter if they’re husband and wife, they’ll always support each other. Her recent filing or any filing for that matter doesn’t mean he’s going to stop fighting to win her back.”

“Despite the recent filing by Kim, Kanye hasn’t lost hope to be with Kim again. As he goes out more and he’s holding events and concerts, he’s always inviting Kim and will continue to do so. His sole priority is making sure she’s taken care of and treated like a queen, whether they’re married or not. That will always be a priority and that will never change.”

So while it looks like the two may never be getting back together and if there’s anything we’ve learned from Taylor Swift, heartbreak doesn’t last forever.