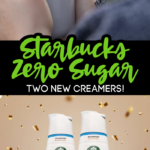 I don’t know about you, but for me… this is the most caffeinated time of the year!

As a photographer, the holiday photo season starts in September, and it’s a crunch right down to the very last minute.

I consume more caffeine this time of year than any other part, I don’t even know if it’s the caffeine that keeps me going or the happiness that a good cup of coffee brings me.

Maybe a little bit of both.

I normally just add a splash of heavy whipping cream, but sometimes I like to dress it up a bit and make it a little fancier.

I’m trying to cut out as many added sugars as I comfortably can… I mean… you really don’t want me to be a complete miserable cow to those around me so yeah… I still have a little sugar.

But the idea of being able to add more flavor to my coffee without the extra sugar is a doable thing!

Both of the new coffee creamer flavors are inspired by popular Starbucks drinks.

I just hope they continue adding more flavors to the zero sugar line.

The two zero sugar flavors are:

The two new creamers are already being spotted on store shelves nationwide, so I’m about to head out to hunt some down.

You can use these for both hot and iced coffee drinks depending on your mood.

It’s going to be a very merry Christmas for sure!

Flavors I would like to see next in the zero sugar versions are Cinnamon Dolce and Peppermint Mocha!