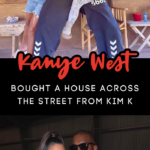 This family — the West / Kardashian family — are the gift that just keeps giving us all the media stories.

Whether it’s Kanye’s weird listening parties, or whether we don’t have any clue if they are still together. Whether it’s Kim dating Pete Davidson, or Kanye wearing some weird-o disguises. We know we can always count on this family for a good story!

The latest news in the Kim / Kanye saga is the location of Kanye’s newest house.

We already know that the rapper formerly known as Kanye has been making claims and public declarations that he is going to end up with Kim in the end, but is this house the next step in that story?

Odds are, the REAL reason that Kanye is purchasing the house is to be closer to his kids. But, it doesn’t hurt his ploy to win Kim back.

The house is reportedly a $4.5 million home, is just over 3,650 square feet, has 5 bedrooms, a swimming pool, and a stable. Can I just live in the stable?

It made perfect sense for him to have a place near the kids — He scooped it up right when it hit the market in early December and the escrow closed right before Christmas.

The house apparently needs some work (they are calling it a “teardown“), but it is “perfect to be developed into whatever he dreams up.”

He only bought it for the location. It’s near Kim and the kids. He has a vision for the house and plans on starting construction ASAP — It will be family-friendly. He wants to be able to have the kids over as much as possible. Living only in Malibu was making visits more tricky for Kanye

Kim filed for divorce back in february, recently went to the California courts, asking to have West’s name removed from hers, and asking to be officially single.

Kim is reported to be dating Pete Davidson — they were still hanging out around Christmas — and there is no word on the relationship status of Kanye.

But, congratulations to Kanye on the new home, and we hope he gets to make tons of precious and happy memories there with his children.