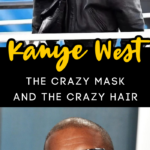 This dude. Kanye. Ye. He is a bit of a weirdo eccentric enigma.

Just in case you don’t know what “enigma” means it is “a person or thing that is mysterious, puzzling, or difficult to understand.”

If that doesn’t explain Kanye to a tee, I don’t know what does. LOL!!

In today’s episode of what the hell is Kanye doing now, we are giving you a two-fer.

He is definitely keeping fans guessing and talking about him.

FIRST of all, Kanye performed at a wedding in Venice, Italy. But, he wasn’t just performing as Kanye. He wore some sort of face covering — which was actually the starting point for what would be a weird Kanye weekend.

Weirder than normal, I mean.

A couple days later, he was seen near the Venice airport in an off white, creepy AF mask that is kinda reminiscent of a serial killer in the movies.

Then, on Monday the dude arrived at the John F. Kennedy Airport, in NY, sporting yet another latex-type mask.

Now, and this is just my opinion here, but if you are wanting to not be recognized, this ISN’T the way to appear in public incognito.

I don’t know, maybe he was wanting people to point and stare. That could have been his entire purpose.

THEN, later that day, Kanye took to Instagram to show the world his new haircut.

I might just be old. I’m definitely not in the “fashion icon” circle of influence. But, um, his hair kind of looks like it was done with a weed whacker.

Oh, Kanye. You just keep us talking, and keep us guessing. What’s in store for us this week?