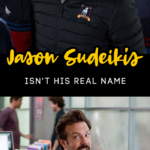 Celebrities rarely use their real names. I’m not sure if it’s because they just don’t like their given names, or they want some anonymity in the real world, or maybe they have the same name as another celebrity and don’t want to confuse the issue.

Although Miley Cyrus has officially changed her name, she was born Destiny Hope Cyrus. Nicki Minaj is really known as Onika Tanya Maraj-Petty. Katy Perry may want us to call her Katy, but her REAL name is Katheryn Elizabeth Hudson. Even Ashton Kutcher goes by his middle name (his first name is Chris).

There are about eleventy billion more celebrities who don’t go by their given names. In fact, if there is a celebrity out there, I’m betting there is about a 70% chance they aren’t using their real names.

We can now add one more celebrity to the list of fake namers.

Jason Sudeikis, who you know from Saturday Night Live and Ted Lasso, is the name switcher-upper in this case.

Many times, celebrities change up their names for Hollywood reasons, but not Daniel — er’ — Jason.

This goes all the way back to when he was but a wee babe.

As you can imagine, that would get a little confusing.

“Hey, come here, Daniel!!” — Which one are you talking about?

My mom decided to call me Jason, so that we knew which one she was yelling at.

Of course, he was joking. But, you can totally get his point.