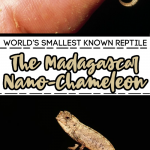 Madagascar is the home to over 100 Chameleon species! I had no idea there were so many different types of Chameleons.

In fact, did you know that scientists believe there are around 8.7 million species here on Earth? Like species in general, not just Chameleons.

Scientists have only identified about 1.6 million species on Earth. There is still so much life on our Earth that has still not been discovered.

I often think about what is lurking deep in the ocean that humans have never seen. It kind of creeps me out.

Anyhow, scientists discovered a Chameleon species called the Brookesia Nana, AKA the Nano-Chameleon. So far, this is the smallest known reptile in the world!

A fully grown male measures 22 mm which is .87 inches and the females are 29 mm which is 1.14 inches. These measurements include the tail, they are so TINY!

Frank Glaw is a German herpetologist and photographed the little critters. He said that they can’t change colors and usually hang out on the forest floor instead of the trees.

You can learn more about this amazing tiny creature by reading the scientific report written by Frank Glaw.

This video is pretty informative as well! Check it out and show your children too!