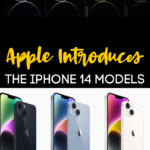 Forget the iPhone you currently have because Apple just reveled the 14 generation of iPhones and all its glory that comes with the mighty rectangular phone.

Most recently revealed at Apple’s new “Far Out” event, Apple exposed the latest iPhone designs, software, and tech tricks with their latest model.

Apple confirmed that it will be selling multiple models of the new phone when it officially releases in stores and that it’ll come in four different versions including the iPhone 14, Plus, Pro, and Pro Max.

Now let’s move onto the tech side of things.

Many core functions of the iPhone 14 have been upgraded such as the battery life that’s supposedly the best ever seen in any iPhone and the camera which has also been boosted.

Other features in the pro models that are not featured in the base iPhone 14 have been upgraded as well.

For those who want their messages to show blue can expect the base model and the pro models of the iPhone 14 to release this month on September 16, while the Plus will drop next month on October 7!

Pre-orders for every iPhone model will begin tomorrow on September 9 and each price of course, varies by model.