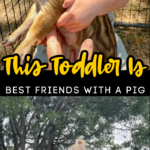 They say our pets are like family; whether it’s the ten year old Golden, the new kitten or apparently a tiny piglet.

TikToker @azandmommy who recently showed her toddler riding her bestie, apparently the two are best friends forever and this story couldn’t get any cuter, except it does!

The video which showed a collage of pictures and a short clip of her daughter riding the pig, from what it looks like these two have grown up together, so no wonder why they’re best friends!

The TikTok family who lives on a farm, Ms. McNaughton tries to teach her daughter Azalea to love all things outdoors including the farm animals that live next door to the house.

The tiny piglet which turns into a larger pig and Azalea who grows a few inches herself, by the end of the video the two have grown so much together, in fact eight months according to the bottom caption.

The video which encapsulates the friendship with smiles and giggles, the video has reached viral status, racking up millions of views and TikTokers who were quick to comment how adorable their friendship is.

They say a man, or a woman’s best friend is a dog but for this family, it’s their pig!